[For more info on what the ‘Five Photos, Five Stories’ Challenge is, click here].

Yesterday, THAT guy sat next to me in the staff meeting. He’s the guy who will walk into your office without knocking, and won’t stop at the threshold, but will come in several feet deep, uninvited, unwanted, and talk to you (because as far as he’s concerned why wouldn’t you want to talk to him? Umm ONLY FOR LITERALLY EVERY REASON EVER). He’s new in the office and you don’t care to get to know him, because you find him creepy, you don’t understand his weird name that isn’t a real name, you don’t like the way he slicks back his hair and wears those terrible black Sauconys like it’s 1988, that he tried to ask you to lunch, and that he asks you things like it’s your responsibility to acquaint him to the office–THAT IS WHAT HR AND THE GENERALLY TERRIBLE PEOPLE WHO CHOOSE TO GO INTO THAT FIELD IS FOR.

When I sat down for the meeting, he pointed to the chair next to mine and said, “can I sit here?” I said, “yeah, or one of the other chairs.” Of course he sat down right next to me. I stood back up and walked out since the meeting hadn’t officially started, just to get as much time away from his as possible before I was forced to spend an hour-and-a-half breathing him in. A few minutes later, I walked back into the meeting alongside my boss, and did that awkward whispering-through-my-gritted-teeth thing as I said, “Idon’tlikethisguyhesatnexttomehe’screepyandIdon’twanttositnexttohimhelpmeeeeee.” My boss, the rational human that he is, simply said, “sit somewhere else.” I panicked as he abandoned me to take his usual seat–I was so angry that I now was forced to sit next to this guy, because I couldn’t move without it looking weird/rude, and, as we learned from yesterday’s disaster at Starbucks, I’m not good at simply saying “no”/telling someone I am not interested in interacting with him, even when he is a creepy guy. So, I just scooted really far away from him and turned my chair in the opposite direction from him, so my back was facing him. I felt kind of bad and worried I was being mean, since this guy is likely harmless and I’m overreacting, but then I remembered that I don’t care.

One of my favorite people in the world asked me to draw him a stick figure diagram of what this situation looked like, so, I present to you, ‘Alex Enacts Her Social Retardation & Intolerance of Other People’ (charcoal & printer paper, 2015): 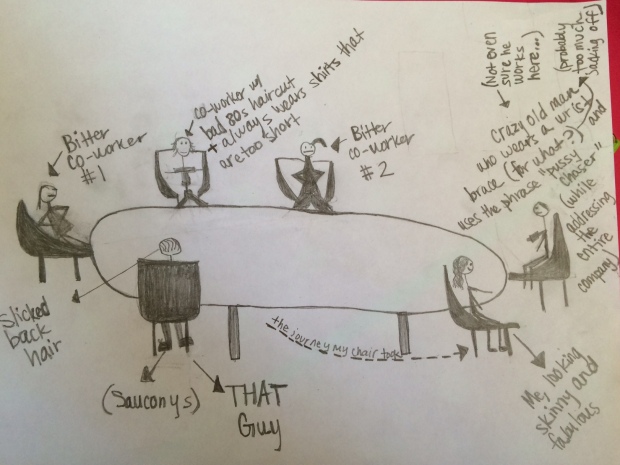 The next blogger I’d like to nominate for the ‘Five Photos, Five Stories’ Challenge is Jillian (How to be Myself). Totally up to you whether you participate! You can find the rules here.

13 thoughts on “‘Five Photos, Five Stories’ Challenge Day 4: When THAT Guy Sits Next to You”