So you get onto a residential street and it’s all permit parking, so you pull over and put your hazard lights on and then call roadside assistance and it’s going to take them an hour to get there, so you call your mom and she expresses concern for your safety so you say, “I’m in fucking Beverly Hills, Mom. My life is not in danger,” just as a slightly scary looking man walks by, and then the cops show up a few yards behind you and apprehend the slightly scary looking man, and you really have to pee, so as the police are about to leave you run towards them waving your arms yelling, “Excuse me! Officer! Excuse me!” [fully aware that the only reason you can do this without getting shot is that you’re a white female] until they finally notice you and you say, “I have a flat tire and I’m illegally parked over there, but I really have to pee, so could you help me please?” as you gesture to your car, so one of the officers points you in the direction of the nearest business and tells you he’ll give you an exemption so you won’t get a parking ticket while you find a bathroom, and you think the LEAST they could do is give you a ride to the nearest bathroom I mean so much for public SERVANT, and also you’re a little worried because you have an air freshener hanging from your rear view mirror that says “I ❤ MY PENIS,” but you decide he’ll just have to deal with it as you scurry off to find the nearest business, which it turns out isn’t near at all, but the merciful cashier lets you use the bathroom, so you pee really quickly and then run back to your car in your cowboy boots and you haven’t run that much in ever so by the time you get back to your car you’re really winded and you def pulled your hip flexor, and then you wait another 45 minutes for the guy to come and you feel really ashamed that you don’t remember how to change your own tire, and then the next morning you take the tire to get fixed and the guy tells you it isn’t under warranty, despite the car being brand new, and it takes them three and a half hours to patch it, and it turns out it was the tiniest nail known to mankind that caused the flat because of course it fucking would be, and the guy ends up not charging you for it, probably because at this point you’re looking like a pretty pitiful rabid raccoon.

The narcissist is arguably the biggest problem currently facing the world. Maybe it’s because of the rise of the Millenials, but man—self-centered, self-obsessed, self-interested motherfuckers are everywhere. And, of course, they like to argue. Because they think they’re always right. So allow me to present you with tips for strategic tactical warfare in the fight against narcissists.

1. Make them think all of your points are their points

They won’t accept anything you have to say unless they agree with it, and they’ll only agree with it if they come up with it. So just lay the groundwork for them to come to your conclusion. “Gosh… I just wish I could think of a way to justify my assertion that what you did to me was offensive and cruel… But darn it, I’m drawing blanks. It must be my pea-sized brain… What’s that? You can think of 20 ways? Pray tell!”

2. Use a high-pitched voice

Nothing pisses people off more than when you’re overly cheery, especially if it’s during a heated argument and they’re angry or upset. Yet, if you maintain the cheer, they can’t accuse you of being mean or underhanded, so they get even more pissed off and it’s just so much fun to watch them implode. It’s like watching the private Kardashian jet crash in slow-mo.

“And” is just a way less combative word. I.e. “Well I tried to tell you how I felt and your raging psychopathy got in the way”—has a nice ring to it, right?

4. Respond to everything they say with “Yes, and…”

Like they teach you in improv classes (or so I hear from every aspiring actor ever). Not sure what purpose it serves there, but in this context, it gives the illusion you’re agreeing with them, when really, you’re following up with targeted, flawless defenses. They’ll be so thrown off, a few cracks of light will start to appear in their ego, and that’s when you pounce—at their most vulnerable.

5. Stand in front of a mirror

But so that you’re facing away from it. Narcissists love to look at themselves—that’s why they invented the selfie—so they’ll be staring into their own eyes while arguing with you, and since they would never argue with themselves, their thesis will crumble—like Rome; or your self-esteem in any given dressing room.

Use a PowerPoint if you have to. Even a narcissist can’t deny cold, hard truth. They’ll try, of course—but hit them with an encyclopedia of facts and watch them flail like a lame duck, ripe for hunting (but not actually because I don’t believe in killing innocent animals for fun because I’m not a SOCIOPATH).

7. Remember that, most likely, there’s no winning

Even if you present the most sound argument, narcissists, by definition, won’t hear it. They’ll find a way, in that twisted little mind of theirs, to convince themselves, despite all evidence to the contrary, that they’re right. This is one of the saddest, but surest, things about humanity. Which is why life is so hard to live—it’s impossible to observe most human behavior without going crazy. Which is why you just have to ignore most people/narcissists, and, while they’re talking to you, instead of listening, day dream about all the ways you could kill them and get away with it. #ifapersonismurderedandnooneisaroundtowitnessit,diditreallyhappen?

First of all, whoever is criticizing you is obviously a bumbling idiot. But just because they’re clearly misguided doesn’t mean they’ll shut their trap hole and keep it to themselves. So you have to be able to take criticism with the grace of a swan, and move on with your life without getting hung up on it to the point of shame spiraling. No stranger to critique and the shame-spiral, myself, I feel I am uniquely qualified to give you some tips on how to handle being criticized. Here they are.

First, spit in your critic’s face

It is imperative to establish the power dynamic immediately—otherwise, the dolt who dared utter negative words about you to you will think they’re the dominant one, and before you know it, they’ll be humping your leg while stealing your lunch money. We’re setting a tone, here, people.

Then ask them for a one-page defense of their stance

Typed and single-spaced, of course. You’ll wait… If they’re going to criticize you, they’d better be able to back it up. Should they fail to present a solid defense, as they inevitably will, you’ll have the opportunity to obliterate their argument piece by measly piece. I suggest having a red pen on hand so you can mark up their pathetic excuse for an argumentative essay whilst verbally attacking them. And let’s not forget to also make sweeping hand gestures—I find it helpful to imagine you’re walking behind a maddeningly slow person on the street, à la herding cattle.

Consider what they have to say

Mostly so that you can tell them you considered what they had to say when deciding to reject it and proclaim that they can suck thoroughly on a bag of dicks. Now, there is a one in a trillion chance that what they say is true—and we are nothing if not self-aware, humble, always-attempting-to-better-ourselves saints—so don’t completely write off what is most likely rubbish spewing from their pie hole; it could  be a learning opportunity.

Remember that you are the captain of your fate

Meaning that despite what they say—despite what anyone says—you ultimately get to decide how to be, act, think, and value/evaluate yourself (or not). So take their criticism with a grain of salt. And chuck that grain of salt right the fuck over your shoulder so it turns into good luck. People will say shit they shouldn’t, be nosy where they shouldn’t, and be mean when they shouldn’t, so you can’t put too much value into their words. Don’t take this to the extreme and become a narcissist, though—as we’ve seen in cases like the “affluenza” teen and Donald Trump, a lack of regard for rational and realistic thinking can lead to disastrous consequences… and hair.

Yoga teacher: “I saw that!” 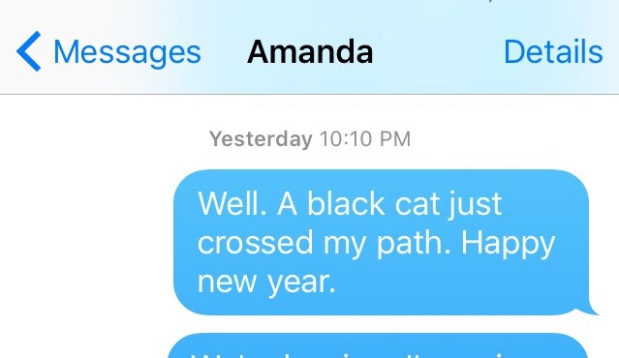