Internet trolls: people who have nothing better to do than make demeaning/stupid/rude comments online directed at you. They’re their own breed, whose life blood is the immediacy and anonymity of the Internet. These guys go deep into comment threads—apparently none of them have jobs, or life purposes. And, as with all hostile predators, they require special handling. So here’s how you deal with them. 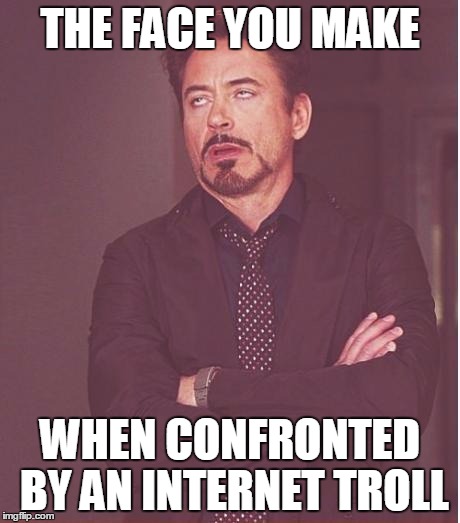 Don’t spend much time on them

Decide whether you want to call them out or not, but do so quickly. They are not worth your time or energy, so don’t waste it on them. And even if you do decide to call them out, put a limit on how long you’re going to spend doing so. Because, remember, they are immune to reason—so even if you respond to them with the most bulletproof statement, they’ll keep spouting their nonsense, because they’re crazy. That said, if you do decide to engage with them…

Pick apart their attack piece by piece, providing evidence that backs up every bit of your statement. Cite sources, diagram your argument, include footnotes and definitions (people love when you quote the dictionary at them)—make one sweeping retort, and let that be it. Even though they’ll keep spinning their wheels, one solid response is usually enough to make clear your position and that they are a steaming sack of shit. Then, walk away and watch the feathers fly…

Sometimes, they just need to be shut the fuck out. So if you’re dealing with a particularly pesky/psychotic troll, take away their agency. Block them on social media and disable or delete their comments. The benefit will be twofold: they can’t bother you, and they will implode because there’s nothing they hate more than having their platform pulled out from under them. #byeeeeeeeeee

If it gets real bad, like they’re threatening or stalking you, report them to the powers that be—the social media authorities, the police, FBI, CIA, DHS, ICE, Dateline NBC, Ryan’s Roses.. #it’salothardertotrollfromprison,bitch

If they can dish it, they better be ready to take it. Troll them hard—spam the heck outta them, correct their grammar, accuse them of being a slavery-denier, insult their mom, show up at their doorstep with an actual steaming sack of shit… The possibilities are endless. #theGoldenRule,motherfuckers #it’satrolleattrollworld

8 thoughts on “As Featured on News Cult: How to Deal with Internet Trolls”